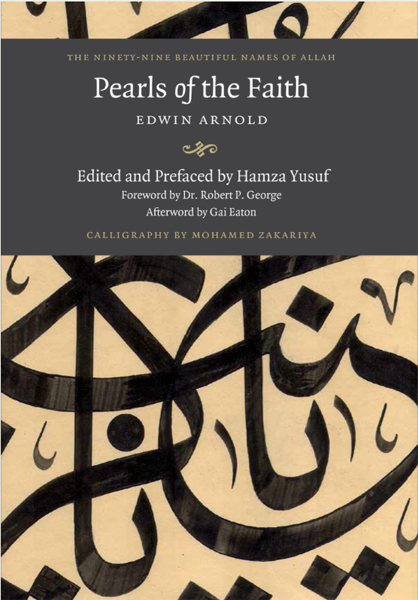 Pearls of the Faith by British Victorian journalist and traveller Sir Edwin Arnold.

First published in 1884 Pearls of the Faith was an attempt to present Islam in an appealing and intelligent manner to a world steeped in prejudice and colonial disdain for Islam. When I first saw the text ten years ago it seemed archaic and written in a kind of verse that reminded me of the stories of Rupert Bear, an illustrated childrens' story book awned in verse form which I had up with grown. I didn't really understand Hamza Yusuf's motives in wanting to republish it but after ten years and a now very different world that we live in, it actually makes a lot of sense to re-present it to the public. After careful editing involving many spelling changes and the addition of the essay by Gai Eaton, a foreword by Robert P George, a prominent professor of Law from Princeton who gives a Christian perspective, the book has been given a new lease of life. Hamza's preface unlocks his own motives behind its publication and how he came to find the book in the first place. Part of his preface I have reproduced here.

Pearls of the Faith is a book that harkens back to a slower time, before the nanosecond, before supersonic travel, before the advent of cyberspace, when handwritten letters took weeks to deliver, and people sit under a canopy and read light verse about other faiths in faraway lands. It was a time when lettered men and women wrote prose and poetry in the hope that it might engender greater understanding of a richly diverse world in dire need of peaceful co-existence, reciprocal respect, and aeper knowledge of the evergreen truths hidden in the myriad teachings of our various world faiths. The love and appreciation of poetry, far more widespread in Sir Edwin Arnold's day, is unfortunately lost on many in our impoverished and illiterate post-modern culture. In light of that unfortunate reality, we humbly offer this reprint of a 19th century British poet's effort to help cleanse the doors of perception regarding Islam and hope that it may also help revives a love of such aspirational literature in these troubled times.  (Hamza Yusuf, Zaytuna College)

Mohamed Zakariya, America's arabic calligrapher emeritus, contributed a great swathe of his work to the project. All the 99 Names of Allah as well as calligraphic set pieces. It illumines almost every page of the book (and the cover) and reproduced here is a typical page spread to give you a taste of it.

I have always thought that poetry more than anything is enhanced and honoured by good typesetting and printed on good paper stock in a hard back volume. In this case every poem had a different metre, stanza length and line length so it was almost impossible to standardise the pages. Almost every page had to be considered individually. The editor and proof readers have carefully adjusted spelling and transliterations to make it more comprehensible to a modern reader.

Pearls of the Faith is now available.

The Road to Mecca
Scroll to top