The Legacy of Andalusi Agriculture 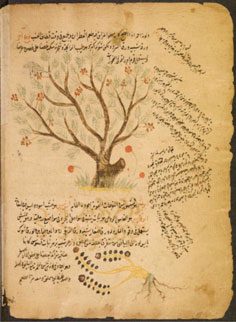 While agriculture improved and expanded throughout the Muslim lands, it was in Al-Andalus that it reached its apogee. In the opinion of Scott in his History of the Moorish Empire in Europe the agricultural system of Moorish Andalusia was “the most complex, the most scientific, the most perfect, ever devised by the ingenuity of man”14. Superlatives aside, it surely marks one of the high points in world agricultural history, supporting a 10th century population of about 10 million15 as well as major exporting sugar-refining and textile industries, the latter based on the fibre crops cotton, flax and hemp and dye-plants including indigo, henna, madder and wo
ad. The extraordinarily bio-diverse agro-ecosystem of Al-Andalus was composed of cultivated lands – a mosaic of tree crops, huerto or market-garden crops, and field crops, both irrigated and rain-fed – permanent meadows and pasture lands, and commons with rights of usage by local inhabitants. The range of crops available to the medieval Andalusi farmer was extensive. Towards the end of the 11th century Ibn Baṣṣāl mentions more than 180 cultivated crops and plants, and at the end of the 12th century Ibn al-‘Awwām notes 585 different species and cultivars, though not all of these would have been cultivated. It is worth listing the most important of these:

Fields of cereals and pulses were sown with wheat, barley, rice, millet and spelt among the former, and broad beans, kidney beans, peas, chickpeas, lentils, vetch, lupine and fenugreek among the latter; sugar-cane was grown on the coast of Almuñécar and Vélez-Málaga; fibre plants included flax, Asian cotton and hemp; dye plants included safflower, madder, henna, woad and saffron, and sumac was grown for tanning; wild species such as esparto, osier and oil-palm were harvested; numerous ornamental species were planted in gardens and an enormous number of medicinal herbs were also employed16.

It was here too in Al-Andalus that an important development in Islamic agriculture took root and flourished in the form of an Arabic literary genre – the Books of Filāḥa – which attempted to synthesize the accumulated knowledge and theories of the past with practical husbandry on the ground, thereby systematizing a new science of agriculture. The Books of Filāḥa are scattered in hundreds of manuscripts, many of a miscellaneous character and frequently mis-catalogued, in dozens of libraries across the world, and it is only relatively recently that these texts and their authors have been established with reasonable certainty. Nevertheless many questions remain and there is still much work to be done on the corpus of Arabic agricultural literature in general.

excerpt from the Filaha Text Project